With each media leak, political gaffe and presidential tweet the current, the ever-increasing political storm seems to grow more and more chaotic and out of hand. In the midst of this maelstrom, we also see a rise in young people wanting to become more involved in shaping and making choices that determine their future. However, the waves of information available to us in our digitised age are stifling this desire to participate politically. Finding ways to get into politics besides turning on the TV at 10pm, can be a task that many feel they don’t have time for or don’t know where to start.

That is why I hope to provide some easy and fun ways to access politics for those who wish to get more involved.

The first and probably least surprising way to understand politics is through YouTube. Despite the concerns surrounding certain Youtubers, there are many channels (besides news channels) that can allow for one to gain a better and more thorough grasp on what is going on.

The first channel I recommend is the London School for Economics (LSE) YouTube channel. Whilst the mass of student vlogs on ‘How x settled into LSE’ can be a bit off-putting, the channel routinely uploads both podcasts and public lecture recordings that delve deep into issues from whether higher education is actually beneficial to questioning the human cost of conflict.  These provide an opportunity to get to know politics through university-style lectures, some of which are live streamed. Some live streams, however, are not uploaded afterwards so make sure to click on the notification button.

Now This World  provides insight into current political issues through predominantly short informative pieces on current affairs such as the cape town water crisis or continued crisis going on in the Gaza. However, it is important to mention that despite the way in which it presents itself, this channel is not ideologically neutral and should be taken with a grain of salt. The slight liberal bias of this channel should be considered when watching. In fact, it should encourage you to find other, alternative narratives on the issue so that you can form your own opinion. Rather than taking it as fact, I would recommend using this channel as a starting point.

To understand the fundamentals of politics beyond just current affairs, I would suggest two channels: CGP Grey and the Crash Course playlist on U.S. Politics. These channels help breakdown political institutions and functions in a fun and educative way that is especially good for those interested in studying politics - I distinctly remember CGP’s Grey’s video on First past the Post Voting being used in my A-Level Politics class. Although both these channels do have political content, this is not the entirety of what they do. Crash Course, for example, also has a playlist for topics such as World History and Engineering, so it may be worth looking at some of their other videos before subscribing.

ON THE GO APPS: FLIPBOARD

Next to commonly frequented apps like BBC News and the like, I frequently use Flipboard. Flipboard is an app that gathers together a multitude of different newspapers and magazines of varying topics. From domestic and world politics to technology and photography, the app hosts various different news sources and magazines. Popular stories covered by more than one outlet, often have a tab below the article advertising other media coverage of the same story. This, better lends itself to painting a broader narrative of events as, unlike the above suggestions on Youtube, alternative sources are easier to access without the interference of algorithms.

Flipboard also allows you to personalise your feed and receive articles that are in line with your interests. So, whilst I check the app for news, I also use it for photography tips and recipe suggestions (both of which I’m often in need of).

FOR THE OLD SOULS: RADIO AND PODCASTS

Though the age of the radio seems to have passed for many of us, the recent rise in audiobook and podcast popularity has opened a new way of news consumption. This along with the convenience of the internet means that those who are interested in digesting large, intense, deep dives into political concerns have the opportunity to listen and learn on the go. BBC Radio 4, for example, is constantly pumping out material that can be accessed online via iPlayer. For those confused about Brexit, they have A Guide for the Perplexed; For more philosophical and debated topics there is a series called Across the Red Line; and for those interested in becoming a member of parliament,  Today in Parliament regularly analyses what goes on within our representative chamber. Personally, I quite enjoyed listening to The Public Philosopher, a now discontinued series that discussed topics by bringing together a variety of people for debate. The episode on National Guilt, in particular, inspired me to carry out some research of my own about how countries teach history and the way it is influenced by international relations.

Spotify has also begun to upload a considerable amount of political content in their podcast category. These informative podcast are run not only by mainstream media outlets such as Channel 4 and Sky News, but also by independent hosts. Anger management with Nick Clegg, for example is a relatively new podcast that is hosted by the former Deputy Prime Minister. It focuses on the politics of emotion we find ourselves in today by discussing the role of anger in politics with various guests.

TV is one of the more well-known methods for gathering political know-how and there are a number of programmes that are geared specifically towards informing the public on political matters other than the news. Daily Politics, for example, analyses the domestic political situation every weekday at noon on BBC Two, often covering Prime Ministers Questions live on Tuesdays. Question Time brings in political figures both domestically and internationally, to engage in debates not just with the other guests but with audience members as well.

Stepping away from easy access to greater information about domestic politics, there are other channels that also regularly release documentaries on ongoing international issues. Al Jazeera, for example, offer an array of documentaries on stories that may not have populated mainstream media such as Peru’s drug trafficking issue.

FOR THE INTERACTIVE LEARNERS: LECTURES

Going to talks and lectures that are available at your closest university is a more interactive way to get into politics. Whilst watching and listening to talks online can be fruitful, physically being in the lecture theatre and being able to ask questions is a lot more of an immersive experience. Most universities have political societies that host speakers from the fields of politics, law or economics. If you are a university student or know a university student, most of these events are posted on the societies’ Facebook pages where you can register your interest and be informed of any updates. Alternatively, many universities also host public events that are advertised on their website. The University of Westminster, for example, has begun to host a talk series all the dates for which can be found on their events page.

SO…WHERE DO I START?

The availability of all this information and resource at your fingertips can seem quite daunting, but it doesn’t have to be. Engage first with a medium that you are more comfortable with and expand from there. If you are more of a visual learner, I would start with the YouTube videos; If you want something to listen to whilst traveling, try out a podcast. Remember that these websites, links and activities are just a way to get you started. Engaging with politics doesn’t have to be a chore, make your learning experience work for you! 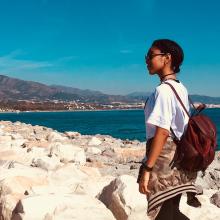